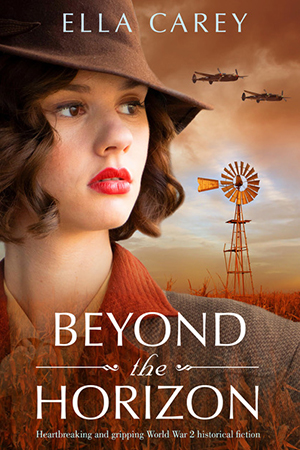 Suddenly, it became hard to breathe and the sound of the engine throbbed in Eva’s head. The plane crashed and skidded. She heard the wail of sirens. The last thing she remembered was pulling her body across the tarmac an inch at a time—before her world went black.

Sweetwater, Texas, 1943. Eva has always wanted to fly away. She jumps at the chance to train with the Women’s Airforce Service Pilots and help the war effort, even if the days are exhausting, the southern nights sweltering. When she’s in the air, it’s all worthwhile: her heart soars, as close to infinity as you can get. And since she met handsome Jack, she has someone to fly back to. But on one dangerous night, everything goes wrong. When she awakes, her body is broken and her memory is gone…

Los Angeles, 1977. Eva seems like a normal married woman with a family to be proud of. When she woke up after that terrible night—a blank in her memory—Jack was smiling down at her. But so many decades later, Eva is still searching for answers about the night that changed her life forever. Why have letters to her fellow pilots gone unanswered for thirty years? What really happened on her last flight?

Ever since that catastrophic crash, Eva has lived with the worst fear imaginable: did she do something terrible enough to make her friends cut her off? Increasingly overcome by frightening flashbacks, where she is fighting to escape from a tiny cockpit filled with smoke as her plane falls to the ground, she desperately tries to uncover the truth. But are some secrets best left buried in the past?

From bestselling author Ella Carey comes a sweeping story, inspired by true events, about the brave, forgotten female pilots who helped America win the war. A story you will never forget, and one that will always stay in your heart.

This book was first published in 2019.

I absolutely adored it!… Gripping and so difficult to put down… So moving… 5 stars!

Completely drew me in… I cried with her… This book will be one of the best you read this year!

Broke my heart and put it back together again. It’s a story of beautiful friendships, enduring, powerful love and the tragedy of war. I cried and laughed my way through it. I highly recommend this book.

Phenomenal!… I thought I had most of the ending figured out until the plot twist, which was brilliant and heartbreaking… One of my favorite endings ever… So moving

A moving, beautifully written novel about the amazing WASP during World War Two. True to life and packed full of emotion

Brilliantly portrays the life of female flyers in World War Two. Seeing what those brave women went through and how despicably they were treated should stir indignation in the heart of every reader!

I am a big fan of Ella Carey’s stories and I devoured this one, it was a compelling read… Moving and at times heart-wrenching, I shed tears but I also cheered these women on, and it has such a beautiful ending—one that left me smiling.