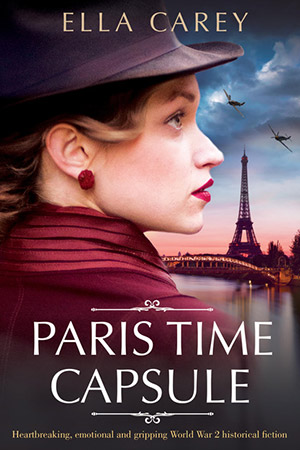 The parcel arrived on an ordinary morning in the mailbox of her New York apartment, postmarked Paris. It was wrapped in brown paper and tied with a silk ribbon. Little did she know that the old brass key and letter it contained were about to turn her life upside down…

1940, Paris. Life is getting desperate for young Isabelle de Florian. Alone with her best friend in her Paris apartment, Isabelle knows that they must seek safety or die. For months she has been playing a dangerous game of secrets with the Nazis, trying to keep the people she loves safe. At last, she secures passage out of the city, packs her best jewels into a small suitcase and steps into the treacherous night…

New York, 2015. Photographer Cat Jordan is shocked when she receives a letter informing her that she is the sole heir of the estate of Isabelle de Florian. She was a friend of Cat’s enigmatic grandmother, who both lived in France until the Nazi occupation forced them to flee. The letter offers few details but is clear on one point: Cat must come to Paris in person.

When she arrives, Cat is enchanted by Isabelle’s beautiful apartment. But why did she leave it to a stranger? Determined to find the truth, Cat investigates her grandmother and Isabelle’s escape from Paris, and discovers that Isabelle was hunted by the Nazis in 1940. But as Cat searches through the dusty letters in the apartment, will the secret she finds change everything she knows about Isabelle and herself?

From bestselling author Ella Carey comes an utterly spellbinding novel about wartime secrets. Paris Time Capsule shows that pulling on the tiniest thread of a life can unravel everything you thought you knew, and change your world forever.

This book was first published in 2015.

Wonderful! Wonderful!!!! I absolutely fell in love with this book!!!!! Such a timeless piece of work! This book will forever make me love Paris!

WOW... Just wow… I absolutely love this story and these characters... This story is filled with everything, from romance to mystery.

OMG! This book is so wonderful! I would absolutely love to get a letter saying there was an apartment in Paris with my name on it, an apartment that had been left locked up for years no less. AHH!

Wow. Just wow. This was an absolutely gorgeous read… I was hooked. It’s rare I find a book that I don’t want to finish because I was enjoying it so much but this is one of them.

I was hooked and could’ve read all night… The twists and turns were ones I didn’t see coming. I loved it!

Hooked from the first page and would keep turning the pages till late at night, trying to unravel the mystery this story is. It is a mysterious, thrilling and suspenseful story.