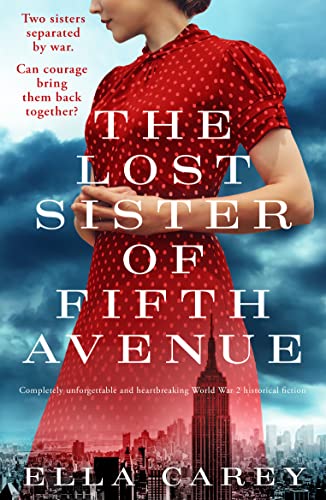 The Lost Sister of Fifth Avenue

Martha pulled the front door of her Fifth Avenue apartment closed and stood stock still, clutching the telegram, her heart thumping. Her beloved sister Charlotte was in France and the news told daily of the growing threat of the Nazis. Fearing what the telegram might contain, Martha hardly dared open it. But she knew she must.

New York, 1938: As Martha looks out of her bedroom window at the blossom-covered trees in Central Park, she is a world away from the threat of the Second World War. Working as a children’s librarian, she is happy with her quiet life in contrast to her adventurous sister Charlotte who moved to Paris and works at a gallery owned by close family friend Anita.

When a telegram from France arrives, Martha is shocked to discover that Anita has died and in that moment she has to make the bravest decision of her life. With the Nazi threat growing, she must travel to France to find Charlotte and Anita’s Jewish parents and bring them home to safety.

Arriving in Paris, Martha finds a city preparing for war. At Anita’s home, clutching her sister tightly, Martha knows that Charlotte has already decided to stay. As an American in Paris she believes she will be safe and will work for the Resistance carrying messages and hiding precious works of art. Through tears, Martha promises to get Anita’s parents to safety and join the war effort back in New York.

But as war rages across Europe, Martha and Charlotte’s determination will be tested like never before. And when Charlotte uncovers a shocking secret about her family, which threatens her own life, can she find the strength to protect those she loves the most?

From top ten bestselling author Ella Carey comes an utterly heartbreaking novel about the strength of sisterly love and the courage and strength of the women of the Resistance perfect for fans of The Nightingale, All The Light We Cannot See and Fiona Valpy.

This is a MUST READ!… Heartbreaking story will move you to tears… Exceptional!

This phenomenal story will touch your heart in so many ways… an amazing escape that you are sure to cherish long after you finish reading… I absolutely loved this.

Wonderful… It gripped me from the first page until the last. The characters are so amazing… This story kept me glued all the way through… Phenomenal… Outstanding

I couldn’t stop reading because this book got a hold of me and refused to let go. This is a corker.

Heartbreaking historical fiction at its most dazzling. Best read with a great big box of tissues… a wonderful tale that is hard to forget... it will leave readers with severely bruised heartstrings… outstanding.