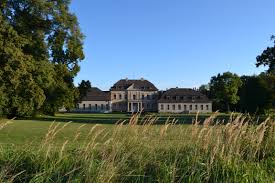 The House By The Lake is a very special book to me. Like Paris Time Capsule, it is inspired by a true story- this time of an old Schloss in the former East Germany. A friend of mine has these beautiful photos in her house of what to me, clearly looked like a palace. Of course, having spotted them on her wall, I had to ask…and then I was hooked.

It turned out that my friend’s mother was part of an aristocratic family who were amongst the largest landowners in old Prussia. They had to flee their Estate in 1946 just before the Soviet army came through- the story of their escape through Germany is extremely dramatic, and my friend’s mother ended up in Australia, after a long journey through Europe and the UK.

But what fascinated me, was that my friend’s mother had written down her memoirs about her life growing up in the old Schloss during the 1930’s- a somewhat turbulent time to say the least in Germany’s history. This woman remembered so much detail from when she was a child and teenager that I was just hooked once I started reading her story.

What’s more, the Schloss was effectively left, abandoned until recently. Now, I understand, the current owner is quite committed to restoring it, and it is possible to visit the grand old palace, which I intend to do.

Here are some photos of the old Schloss to whet your appetite. You can see that the walls are pock marked with bullet holes…

More about the inspiration for The House By The Lake to come.